The original case study was prepared in 2010 as a result of a Small Business Innovative Research  (SBIR) contract awarded to Integument Technologies “Automated Delivery of Pigmentation for  Camouflaging Patterns for Composite Shelters.” One of the deliverables in the SBIR project was  to have a composite shelter (see Figure 8) coated with Integument’s FluoroGrip® applique style  (peel-and-stick) paint replacement film.

The shelter will have been outside, exposed to the  weather of the northeast USA climate for 12 years by July 2022. We obtained photographic  evidence of the longevity of FluoroGrip® in February 2022, appended to the end of this report.

In brief, FluoroGrip® film is withstanding the test of time. The only blemishes that have  appeared were due to the thermal expansion/contraction of some underlying sealant/filler materials.

The objective of this project was to design a prototype system that would randomly distribute  camouflage pigment in a non-repeating pattern over composite structures that will comply with  Air Force specifications. Currently, the U. S. Air Force (USAF) uses metal and composite  shelters that have a unique visual and radar signature.

In order to maintain this unique targeting  signature for existing metal shelters, each must be hand painted in a random manner that is not  repeated for any other shelter.

In addition, the Air Force is currently investigating composite  technologies to replace the existing design and materials for tactical shelters. The composite  materials can be impregnated with pigment, but are difficult and expensive to paint using  conventional Chemical Agent Resistant Coatings (CARC) that are required for all DoD shelters.

Thus, this project was also tasked with developing a coating system that would meet all current  military requirements (including CARC) with additional requirements that included long term  survivability and cost effectiveness.

To achieve the objectives outlined above Integument Technologies, Inc. developed a unique  paint replacement, peel-and-stick applique system that effectively provide the DoD with a  coating system that was environmentally friendly and easily adapted to randomly distribute  camouflage patterns onto pre-fabricated composite shelters or vehicles.

This applique system  was field demonstrated and showed that one could effectively eliminate the need for painting and  repainting existing shelters and equipment.

Although the target application for this project’s appliqué technology is specific to shelters and  housing, Integument has other ongoing work under ONR USMC and Missile Defense Agency  (MDA) contracts that demonstrate field results under extreme conditions that support the use of  appliqué for long-term protection of Air Force shelters as described in this project.

For example, The Missile Defense Agency (MDA) program that has demonstrated appliqué paint replacement  as a superior short- and long-term solution to severe corrosion problems encountered on  equipment, vehicles, and stationary structures located at MDA bases in the South Pacific.

In addition, Integument has worked on a project coating several military land vehicles. Figure 1  illustrates the application of paint replacement appliqué on the USMC’s Expeditionary Fighting  Vehicle (EFV formerly AAAV). Figure 2 illustrates the effectiveness of Integument’s appliqué  patch over a pre-scribed area on the EFV after 9 months that includes 300 hours of sea operation and 200 hours of land terrain operation. Not shown are prescribed and damaged areas that  illustrate corrosion onset in areas not protected by appliqué. 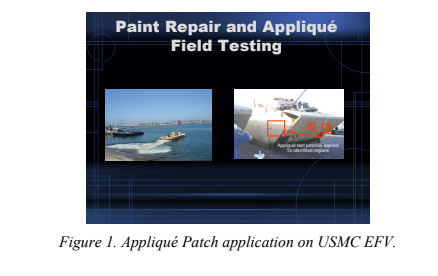 Figure 3 illustrates an M-113 coated with Mil-color tan appliqué for a DoD field demonstration.  The objective was to demonstrate the ease and quickness of coating and removing appliqué from  the vehicle. The vehicle took approximately 1 day to coat and 4 hours to remove, providing the  vehicle back to the exact condition it was received.

Figures 4, 5, and 6 show the results obtained by a third party, Webcore (one of the Navy’s shelter  fabricators) on Integument’s paint replacement appliqué. 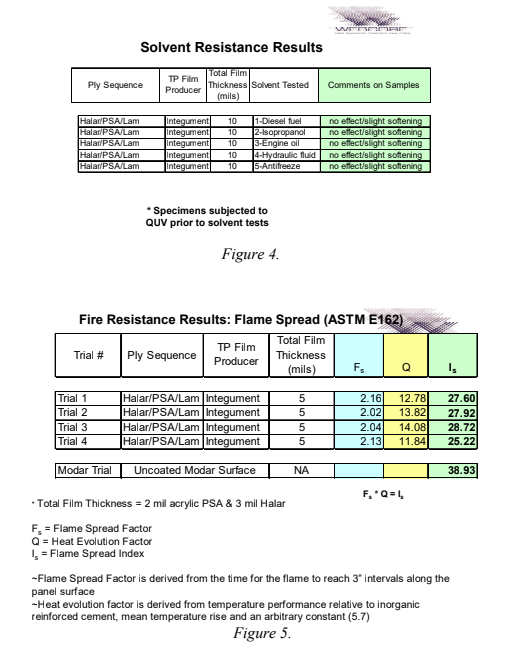 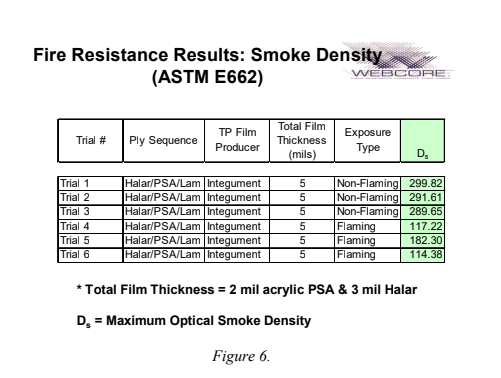 Results shown in Figures 4, 5, and 6 above indicate an excellent alternative to other paints or  coating systems currently under consideration for applications on Air Force composite housing  structures. According to Webcore the results listed above demonstrate that appliqué is  acceptable and either the best or close to the best material with respect to Solvent Resistance, Fire Spread/Resistance, and resulting Smoke Density.

These characteristics are coupled with the  appliqué inherent long-term severe environment resistance as demonstrated in our ongoing  USMC and MDA programs described above. In addition, the following sections will demonstrate  other properties that are superior to other paints and coating systems under evaluation in this program.

Currently there are few if any paints or other coating systems that can supply this  required lifecycle capability other than fluoropolymer-based appliqués that have no known  degradation process even under the most severe environments.

Fluoropolymer appliqués have  the severe environment resistance required for 30-year integrity as well as the ability to protect  and provide a 30-year lifecycle to any underlying substrate.

In addition to UV protection, Integument’s fluoropolymer appliqués offer CARC compatibility  including excellent resistance to chemical agent adsorption (measured via Chemical Agent  desorption tests) and subsequent decontamination compatibility. Results have shown the  appliqué materials to be superior to any other coating system investigated by the testing  laboratory sponsored by the Army Research Laboratory (ARL). A full report prepared by one of  the Army’s approved testing facilities (CUBRC) is available upon request.

Due to the nature of our camouflage applique the design, fabrication and field testing are not included in this case study but can be accessed under the proper conditions via contacting Dr.  Andrew Hope at Integument Technologies, Inc.

The last task of this project was to demonstrate the field application of Integument’s appliqué  technology on a full shelter. The U. S. Air force (project funding agency provided a shelter  located at Hanscom AFB located outside of Boston MA.

Figure 8 illustrates the 3-to-1 Shelter that was chosen for this demonstration. The black cross  hatch lines indicate the area of the shelter that will be used to demonstrate the appliqué  technology. In addition, the back side and top of the cross-hatched section of the shelter will also be coated. 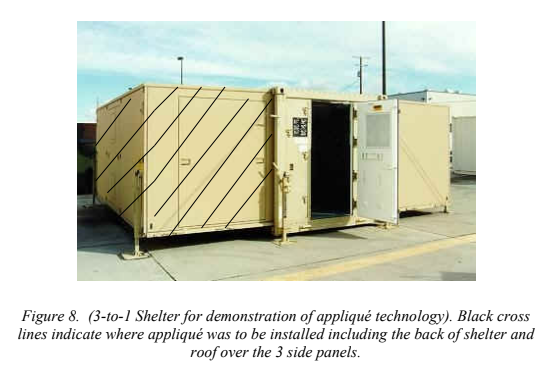 Eight rolls of 3’ x 100’ of 5 mil tan ECTFE appliqué pre-colored via pigments to match Mil- Std color Tan 686- (Fed color code #33446) had an acrylic 4 mil pressure sensitive adhesive applied on the back for securing the appliqué to the shelter surface.

A three member installation team arrived at Hanscom AFB on June 28, 2010 and began to inspect shelter for required surface preparation. In general, the shelter was clean due to several days of hard rain and the team decided that the only surface preparation required was to clean surface of shelter with a dry cotton cloth. No use of the power washer was required.

Figure 9 shows the setup of the operation and illustrates the ease of installation: Specifically, appliqué technology allows one to coat existing structures, vehicles and equipment or prefabricated sheets with a CARC compliant material that is nontoxic, contains no HAP or VOC’s and requires no HAZMAT support during the coating operation.

The following figures (9-26) and comments describe the step-by step installation of appliqué to the shelter sides. 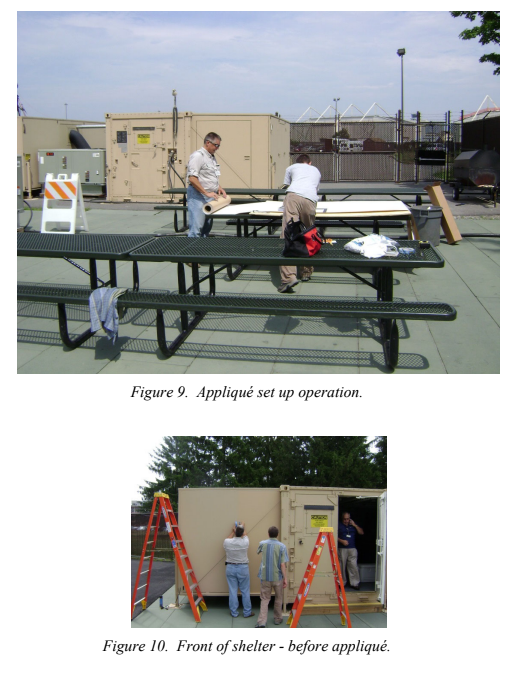 In Figure 11, the cable that could not be removed is seen. Installation had to be performed by  slipping the appliqué under the cable that led to some wrinkling problems on the back of shelter: 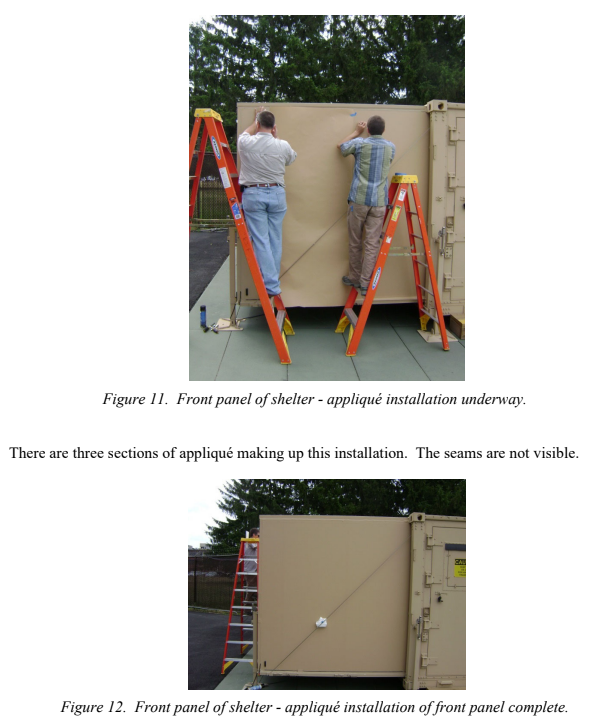 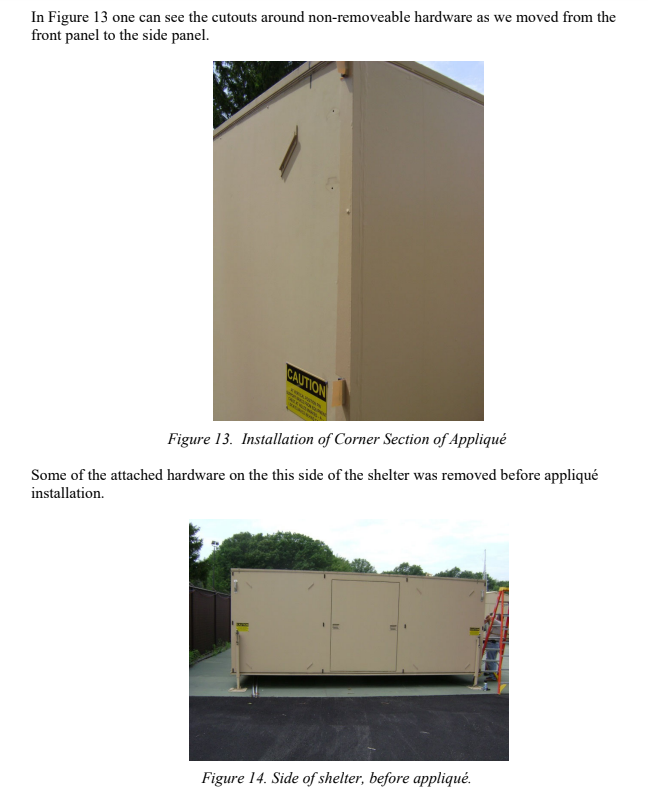 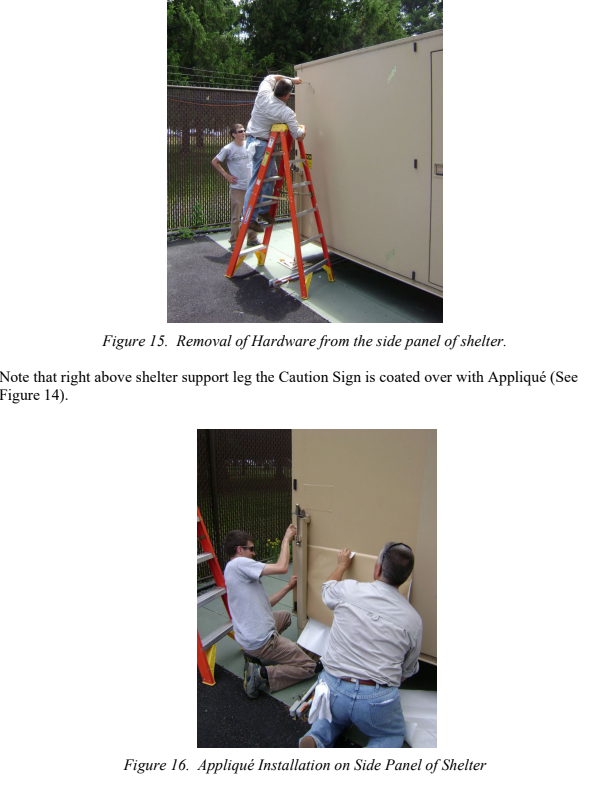 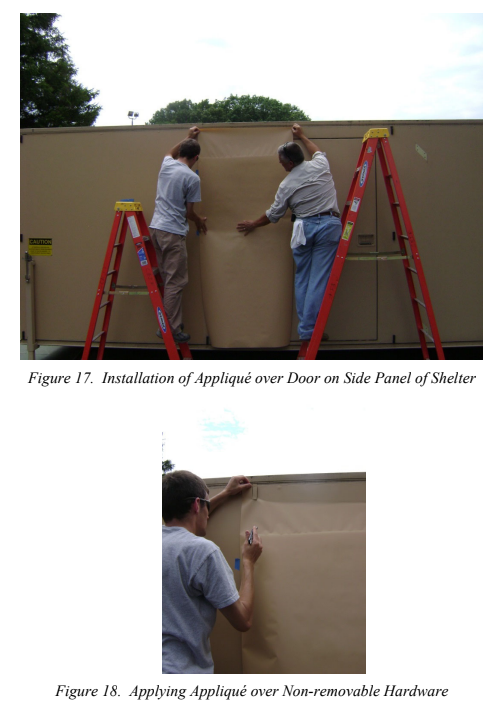 In Figure 19 the whole panel is almost complete, (including door where one can see that the  handle has been effectively trimmed around) excepting about a 3 foot side section being  measured. 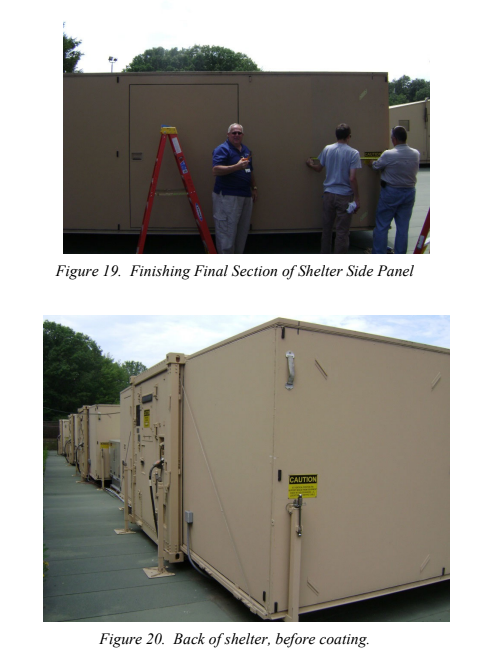 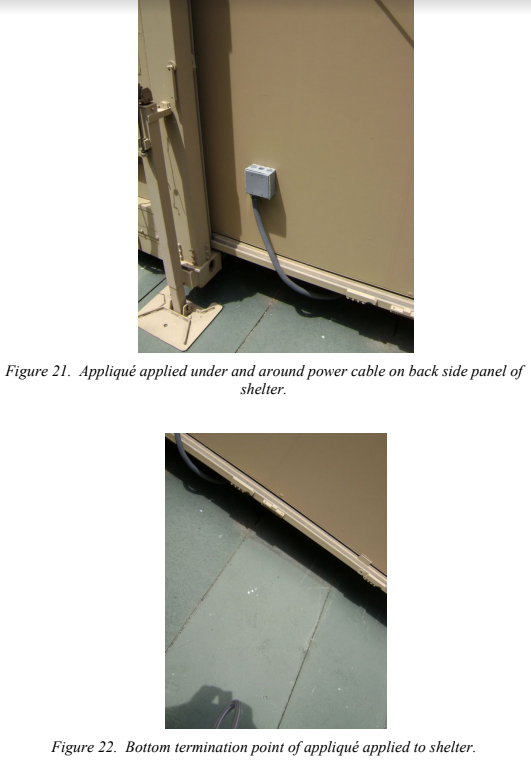 The wrinkling on the back panel (Figure 23) was due to the difficulty in sliding the roll of  appliqué under the cable. This was not as apparent on the front section because the installers  were able to use their right hands instead of left to apply appliqué to the top corner. 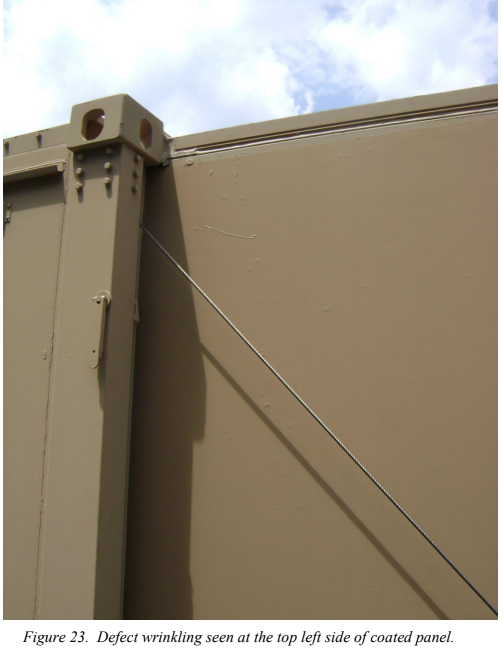 6” Appliqué tapes were used to cap and connect the roof of the shelter with all of the side panels  (This illustrates appliqué on back side panel shown in Figure 1.20). Full coverage of roof was  then applied so that no ingress areas from roof to side panels were left. Note again that the seams  are very difficult to see. Compare the edge in this Figure to that in Figure 20: 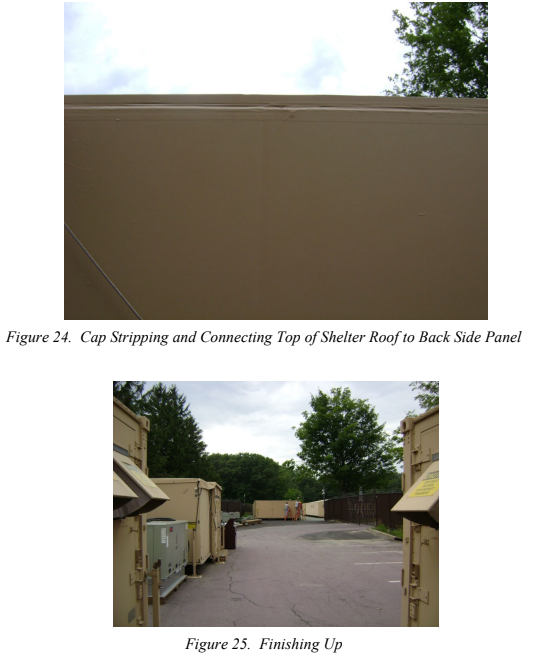 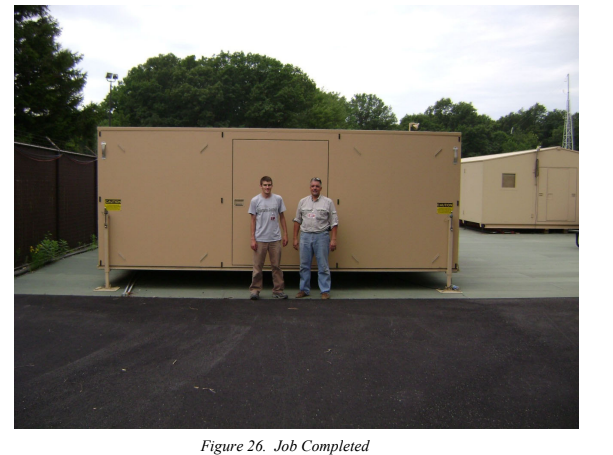 The entire job including 3 side panels and the roof over these panels took about 6 hrs to complete  with two people. Note that the temperature for this day was in the mid 90’s with humidity around 90 percent.

In general, the installation went very well. The installation figures show that the  appliqué color is somewhat darker than the paint on nearby shelters. This is because the painted  shelters have been exposed to long term weathering and UV radiation that has bleached the paints on the existing shelters.

Repainting of these older shelters is cost prohibitive due to the  need to have HAZMAT on site because of the hazardous nature of currently specified CARC  paint for these shelters.

The most difficult part of the installation was applying the appliqué under cables and cutting  around various non-removable components. Some wrinkles and bubbles were unfortunately  visible due to the fact that we had to work around the existing hardware.

In addition, the shelter  contained removable gaskets that are put in place after the shelter is expanded. For future  applications we would advise the removal of these gaskets such that we could apply appliqué and  terminate within the gasket joint. Subsequent replacement of the gasket over these areas would  leave better seals with better aesthetic features.

While the field demonstration went well as illustrated, it is Integument’s recommendation that  the appliqué be applied to pre-fabricated walls and structures associated with the shelters before the components are assembled. This is especially true when considering the Air Force objective  of using composite materials instead of the steel structure that was coated at Hanscom AFB.

We note that application of paint to composite materials is difficult (especially the use of CARC  paints) due to bonding mismatches between composite materials and mil-std paints. This  problem can easily be resolved via the appliqué solution that utilizes various pressures sensitive  adhesives designed specifically for the material that the appliqué is destined to be used on.

Finally, one of the concerns of the program management was that the appliqué currently cannot  be manufactured in sizes that can coat an entire side or wall of a shelter without seams. The demonstration performed and described in this report shows that the seams are barely visible up  close and not visible at 15 feet away from the shelter.

In addition, the seaming technology used  for appliqué creates a permanent bond that eliminates the problem of liquids or other materials  creeping under the seams to the shelter base material.

Thus, based on our demonstration, the  seaming issue has been minimized and future development of appliqué technology envisions the  use of larger equipment that can fabricate appliqué films large enough to eliminate the seaming issue all together.

For additional information concerning this case study, or inquiries about the capabilities of Integument Technologies, please call us or submit a contact form through our website.